How Hotels Can Take Advantage of Twitter Lists (Part 1) 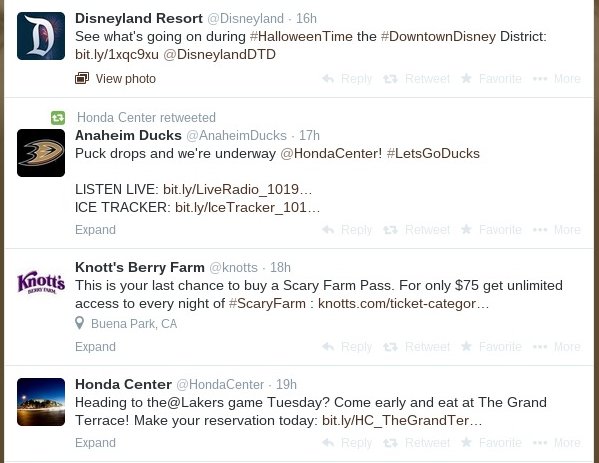 When using Twitter for your hotel, a good rule of thumb is to share other users’ content along with your content. Searching through your news feed to find relevant content to share can be frustrating, especially if you are following a large number of users. There are also times where you may be interested in only viewing tweets related to a particular subject. Luckily, taking advantage of Twitter Lists can quickly help you sort different content on Twitter in any way that you choose.

Twitter Lists help you organize your feed. They are a list of individually selected Twitter accounts that show all tweets only from accounts that have been added to that particular list. You can either create your lists or follow other users’ public lists. For example, say your hotel is located in Anaheim, CA, and you are interested in viewing tweets about what is happening around the area. You can create a list of Twitter accounts that tweet about the Anaheim area. Some accounts you might include to the list would be Disneyland®, Knott’s Berry Farm, the Honda Center, and the Packing District.

When you click on this list, you will only see tweets and retweets from only these four accounts.

There are two ways to access your lists. First, you can click your profile image on the top right of the screen, and a drop-down menu will appear. Click ‘Lists’ to be taken to the lists page.

With Twitter lists, you don’t need to spend time digging through your newsfeed or searching broad hashtags such as #Anaheim or #OrangeCounty to find relevant content to share. Also, Twitter Lists can help keep you up-to-date with all the major events happening around your hotel.

Stay tuned for Part 2 of this article where I will discuss how to create a useful Twitter List.