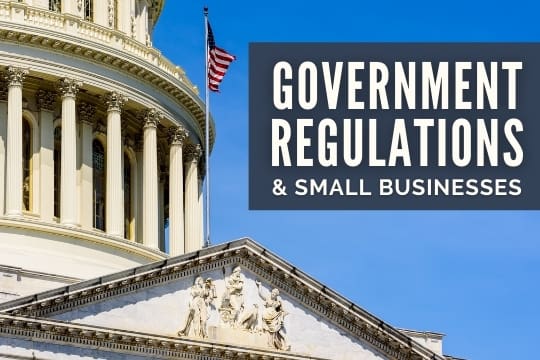 It's already challenging enough for a business to enter a market and earn profits. Add government regulations to the puzzle, and thousands of would-be entrepreneurs are immediately excluded due to costs alone. While many laws exist to help prevent exploitation among big players, government regulations' impact on small businesses can be devastating. These conditions limit free enterprise in America.

Understanding government regulations' impact on small businesses is essential before launching one. Over 45 percent of US GDP is the direct result of small business output. Companies with less than 100 employees employ half of the American workforce.

While job creation at the federal level often gets the most headlines, two-thirds of all new net jobs come from small firms. According to the US Census Bureau, over 2.5 million new jobs are created from a half-million new companies every year. These operations range from traditional family businesses to independent bloggers.

Despite the vast size of the small business sector, fewer startups happen today than 40 years ago. Increasing federal regulations have played a significant role in this decline. The financial collapse of 2008 also contributed to fewer entrepreneurs launching startups despite steady population growth.

It's difficult for a new company to start making profits when it must first spend money on equipment for means of production and regulatory fees. Federal, state, and local regulations potentially create barriers to entry for new companies that might otherwise be off to a running start.

A recent study by the U.S. Chamber of Commerce Foundation found local chamber commerce leaders are widely discouraged by complex regulations. About a third of these leaders even said they advised entrepreneurs not to relocate to their region due to an unfriendly business climate. Small businesses are most hurt by regulatory costs, paying 20 percent more than the national average.

Another small business study funded by Bradley Foundation in 2016 examined how government regulations affect small businesses. It looked at how rules and regulations impact free enterprise and found overwhelmingly unfavorable conditions to small businesses. Analysts have discovered that federal regulatory costs alone in America add up to an estimated $1.9 trillion.

One of the problems that must be addressed is the number of rules and regulations the federal government makes. Over the past few decades, the feds have implemented over 88,000 final rules. Meanwhile, federal agencies have identified over 15,000 of these additions as harming small businesses.

What Business Advocates Must Consider to Fight Regulations

While government regulations' impact on small businesses reduces opportunities, pro-business advocates must construct new arguments that don't ignore why regulations are implemented. Many regulations result from public complaints about big companies ripping off consumers. Government leaders then create new laws to weed out deceptive business practices, only to scare away small businesses that can't afford the legal costs to make sense of the rules.

It doesn't take much research to determine how often the government punishes small businesses while awarding big companies with large bailouts. The CARES Act was a massive money grab for large corporations at the expense of small businesses.

Small business advocates must frame their message of free enterprise as different from the big cartels that dominate American industries. Lumping all businesses under one capitalist umbrella as equal players in the same free enterprise game is an illusion that goes nowhere. The government must view small enterprises as central to the American dream instead of nuisances that get in the way of big business competition.

Where Regulations Got American Business Today

Government regulations have expanded dramatically over the years, but they haven't stopped climate change or corporate fraud. The Federal Trade Commission was launched in 1914 to protect consumers against deceptive advertising and other rogue business practices. Yet, the biggest frauds committed by large corporations have occurred just in the past 20 years.

The Environmental Protection Agency was created in 1970 and has helped reduce greenhouse gasses, but certainly not fast enough. The rise of renewable energy companies has had a more significant impact on reducing harmful pollutants that oil giants now admit.

The Sarbanes-Oxley Act of 2002 culminated after the Enron fraud scandal a few years earlier. The law made accounting and auditing more cumbersome for businesses. But it didn't stop Wall Street legend Bernie Madoff from defrauding several high-profile investors by the end of the decade.

Ultimately, large corporations can hire more people to ensure compliance, whereas many small businesses cannot afford it. Even laws that protect investors don't mitigate fraud as much as hinder small businesses. The 2008 financial collapse was proof as the prominent corporate engineers of the crash got massive federal bailouts while countless small companies shut down.

Sorting Through the Legal Maze

As much as regulations may help consumers, they create legal obstacles for business development. The United States tax code and state tax codes shape company identity from the beginning depending on the business type, such as a corporation or sole proprietorship. Businesses already face a complex tax environment, especially if they hire employees, which adds taxes onto their payrolls for Social Security and Medicare costs.

A new startup owner must also know complex labor laws that affect wages and scheduling. They must also be compliant with other legal requirements involving OSHA workplace safety standards, unions, and antitrust laws. If the company hires 15 employees, it must adhere to regulations overseen by the Equal Employment Opportunity Commission (EEOC).

Failing to comply with government regulations can result in severe fines. Unfortunately, many honest businesses simply don't have the resources to meticulously ensure every company's action complies with the vast body of never-ending regulations.

Adding to the noise of overregulation is the rise of cybercrime and the new laws meant to deter it. Yet, these rules didn't stop the 2021 Colonial Pipeline hack that caused massive power shortages.

Teaming up with subscription-based legal services can help small businesses. Entrepreneurs should also seek assistance from their local Small Business Administration (SBA) office. Another solution for small organizations is getting the right commercial business insurance that pays for legal costs.

In the big picture, businesses need more encouragement from the government rather than more regulations to contribute to a strong economy.

Exploring government regulations' impact on small businesses is imperative before launching a startup. As much as rules are meant to lower business risks, nothing of the sort is accomplished from excessive red tape and regulatory fees. Learn the broader playing field first, then develop a business strategy for marketing online.

Strategies Designed to Detect Data and Comply with Regulations
Why Do I Need EPLI Coverage?
How to Comply With California CCPA