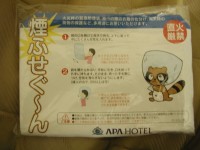 Do you think your company has excellent service? You might find it hard to surpass the lengths that some hotels go to please their customers. While hotels are all about service, there are a few select hotels out there that have gone beyond the usual. They do more than the usual kleenex flowers, free coffee dispensers, and an endless assortment of complimentary bathroom toiletries. They've provided services and amenities that you didn't even know you needed if indeed you needed them at all. These services and conveniences include the following.

Henry Ford once said, "Quality is doing it right when no one is looking." This quote is something that the Westin St. Francis Hotel in San Francisco has undoubtedly taken to heart. Since 1938 the hotel has taken it upon themselves to wash all the currency they receive at the front desk. Each penny, nickel, dime, and quarter you receive from them sparkle like newly minted coins. The service isn't something they advertise. It's just one of those unspoken courtesies, like the triangular folded ends of toilet paper rolls in hotel bathrooms.

The "APA" in Japan's APA Hotel Chain stands for "Always Pleasant Amenity." And while we wouldn't dispute that this hotel offers such pleasant amenities, one particular one had us scratching our heads. You can see a picture of it here.

What we have here is a large plastic bag to wrap around one's head should there be a fire. The plastic bag is intended to protect the wearer from smoke inhalation for about 2 to 3 minutes before the oxygen runs out. We're glad that the hotel is being conscientious about the safety of their guests. This particular amenity made them seem less like thoughtful hosts and more like overprotective parents. I also can't wrap around my head (pun intended) how one wouldn't suffocate.

Crowne Plaza Hotels, in an effort to stave off guests' complaints of sleepless nights due to the snoring of a neighbor, have decided to hire hallway snore patrols in select hotels. These patrollers are to knock on the doors of those whose snorts can be heard from the hallway in certain "Quiet Zones" of the hotels. Repeat offenders of the anti-snoring ordinance will be referred to rooms outside of the quiet area. It seems like Crowne is committed to tranquility in their hotels by any means necessary.

Colorado's Stanley Hotel takes its reputation as one of the most haunted hotels in the U.S. seriously. And they should. After all, Stephen King, while staying in room 217, reportedly had paranormal experiences that became the basis of his book "The Shining." Because of this, if you turn to channel 42, you can have the "privilege" of watching Kubrick's film adaptation of the book forever and ever…

Because of their history of hauntings, the Stanley is the only hotel that we know of to have a resident psychic on the payroll. Not only that, but their social media manager also happens to double as a paranormal investigator. We doubt that any similar positions will open up at other hotels any time soon.

You could fill a volume with the number of unusual requests made by hotel guests. Howard Hughes, for example, had hotel staff hide sandwiches in trees for him to find later. Of course, unless you're insanely wealthy like Hughes was, you'll probably be hard-pressed to find hotel staff who would comply with such outlandish requests.

That's why when a guest of the Hotel Monaco in Portland, a part of the Kimpton Hotel chain, jokingly asked for a bathtub of Reese's Pieces and a bed full of kittens; he didn't expect anything of it.

Upon entering the room, however, he got just what he had asked for!

This guest happened to be a user of the ultra-popular site Reddit, with over 2 billion page views a month (yes, Billion with a "B"). The link reached the front page of the site. It resulted in a massive PR win for Kimpton, all for the price of a card, some candy, and a little thoughtfulness. Pays to go the extra mile, no?